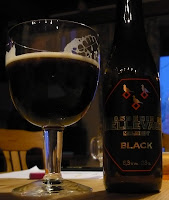 The next beer from our Ardennes winter retreat was the black beer from the Brasserie de Bellevaux in Malmedy. (see correction: there is only one brewery in Malmedy)

On further reflection, I find a strong honey aroma and flavour here. Nona agrees but is more specific: “it reminds me of a chestnut honey”. Again, I’ve never had chestnut honey, so I take her word for it.

But maybe I’m too gullible. Maybe Bob and Nona are just making up these flavours to trick me into opening another bottle. The rascals! Perhaps I should be more careful about the people I get into an igloo with...