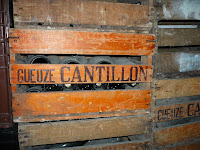 We took our weekend guests to the Cantillon Brewery downtown today. It is also the Brussels Museum of the Gueuze, and as I’ve explained before, it's a great experience. Cantillon gueuze is also in my list of top ten Belgian beers.

I think everyone was fairly impressed. What really hits you is simply the human scale of the operation. A quick tour of the premises shows you the basic steps in beer-making, and it’s so straightforward and so reasonably sized that it’s easy to get your head around it.

The tasting of the gueuze, raspberry gueuze and (cherry) kriek at the end of the self-guided tour was yummy, if not exactly suited to the chilly weather outside.

I didn't have the kriek last time. I think I liked it more than the raspberry-flavoured Cantillon Rosé de Gambrinus lambic as it had a bit less fizz, and the fruit taste was a bit more prominent.

We also picked up a bottle of the Vigneronne to take home, but more on that later...