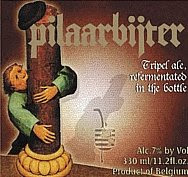 Saturday evening’s tasting, which included Kapittel watou dubbel and Bink Winterkoninkske, ended with a third beer, Pilaarbijter dark. And slightly fed up with the crowded, smoky Chez Moeder Lambic, we tried this one in a different local bar, the empty yet still smoky Palais de la Bière Belge.

It was not the most pleasant of places, to be honest. They usually have a good selection of hundreds of beers, with a storeroom where you can walk around and select your beer off shelves groaning with different bottles. But on this day, the bartender apologised, their deliveries hadn’t arrived for a bit, so the archive was fairly bare. There were also a few old drunks hanging around the bar, one of whom stumbled over and tried to sell us a very ugly table lamp he was holding.

Adding to the weirdness was the label on the beer I chose: Pilaarbijter dark. Yes, it means pillar-biter, and in case you weren’t sure, there’s a handy image to help. This actually comes from a painting by Pieter Bruegel the Elder, the 16th-century Netherlandish painter, called
Netherlandish Proverbs.

It shows a collection of people acting out various Flemish proverbs and sayings of that era. A pillar-biter, pilaarbijter, was a way to describe a hypocrite, specifically, I think, a religious hypocrite.

Not really sure what any of that has to do with the beer, but it does make for a funny -- and royalty free -- picture on the label of this beer from the Bavik brewery.

Inside the bottle, it’s fairly complex stuff, with aromas of teak oil, tar and oakum (smells I like, by the way) mixing with a taste of wild berries. It’s perhaps a bit too fizzy, but at least this beer was served at the right temperature. Alcohol is 6.5% and doesn’t overpower. Enjoyable.