Orval in the cellar 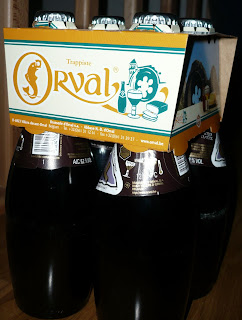 I bought a four pack of Orval on the way home from work today. Nothing unusual in that you might think, particularly if you’ve ever walked home with me. But this time it was different.

When I got home, I didn’t crack one open. No. I took all four bottles down to our cellar and left them there. To age.

Yes, like many Belgian beers that undergo fermentation in the bottle, Orval will change its taste as it ages. Vintage Orval anyone?

The idea to start laying down some beers, specifically Orval, came to me after following some discussions on various beer blogs. Lew Bryson, for example, recently praised the new Orval he had on a visit to Belgium -- which I now understand is the only type I’ve ever had -- suggesting fresh is best. Tom Cizauskas doesn’t have a problem with people aging Orval, but doesn’t like to see people comparing it to wine when they do. Beer can stand on its own, aged or not.

But with my four pack in the cellar, I now find myself asking the question Stan Hieronymus put forward the other day: “When is Orval best?” Specifically, how long should I keep these bottles in my cellar before drinking their contents? With a bit of Googling, I see some people say six months, others two years, and others still five or more years. 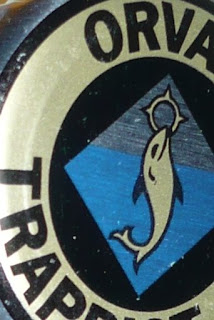 The production date on the bottles I bought this evening is 17 January 2008. So, I’ve already got two months in the bank, I guess. How long they’ll last though is hard to say. Actually, I think I’d better shift things around and put the bottles in some sort of protected box or crate. Wouldn’t want to smash them when taking out my daughter’s bike. Or knock them over when reaching for the Westvleteren 8 that is also down there. (That was not a deliberate attempt to age beer so much as simple over stock after our trip to the monastery, where we bought as much as the monks would allow us to.)

In the end, I’m not really sure how much aging these Orval bottles is going to matter. Orval is already in my list of top ten Belgian beers. How much better can it get?