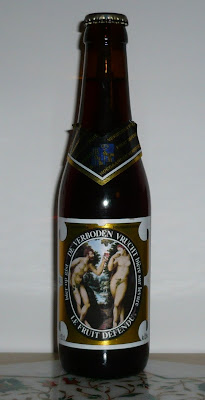 Just because it says Hoegaarden on the bottle, don't think it has to contain a summery white beer. De Verboden Vrucht (Le Fruit Défendu), may not exactly be the black sheep of the family, but it is a ruddy brown -- almost a perfect match with the bottle it comes in.

It pours with a strong head. The taste is dried cherries and caramel, though far less sweet than that sounds. Bitter hops. It also has some spice or heavy herb, which I can’t quite identify, but is very warming and pleasant. Almost rosemary?

I think if I close my eyes and concentrate, I can taste some of the same spices I find in the regular Hoegaarden or Hoegaarden Speciale, but it’s a bit of a stretch, I admit. 8.5% alcohol fits in well with the overall flavour. Overall, I’d say it’s a decent dark beer, a fair step above the other thin-ish dark beers because it’s less sweet than the average. 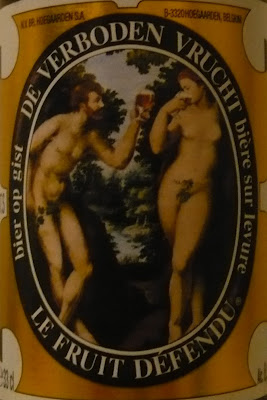 The Rubens painting of Adam and Eve on the label is meant to evoke the whole “forbidden fruit” theme. It is not -- as has been suggested by some including the comically named Bureau of Alcohol, Tobacco and Firearms in the US -- indecent, or a just a cheap way to get a naked woman on the label. Brewers who want to go down that road have other, coarser options open to them, as Evan Rail explained yesterday, when he reviewed a Slovak beer with a label featuring a woman in bra and knickers that one can scratch off like an instant lottery ticket.