The first of many beers during this past week’s winter retreat was a little number called Bière de Malmedy Brune. True to its name, it is a brown beer , which lies a few kilometres from our igloo hide-away up in the snow-covered village of Robertville.

bowling alley, where we enjoyed a couple games later in the week, much to the delight of the kids though not of my back...

...and where I took the photo of the lorry here. Not sure where the lorry-load of Malmedy Brewery’s beer ends up. I’ve never seen it anywhere else but in this corner of the Ardennes. (see correction: there is only one brewery in Malmedy) 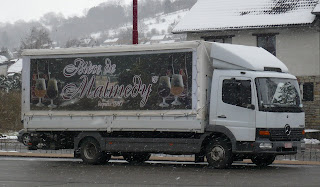 Too bad, actually, because the brune is quite good. It has a crackery aroma and a nutty taste, with a burnt or smoky caramel throughout. The 6.3% alcohol fits in nicely without overpowering the balance. Fiona and Nona said it had a flavour of grape bubble gum, but I couldn’t taste that at all. The overall rating was summed up by Bob (no connection to the aforementioned village): “Surprisingly good for a beer with a leprechaun on the label.”