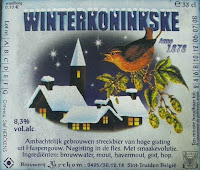 Another beer I tried during our tasting evening at Chez Moeder Lambic on Saturday was Bink Winterkoninkske. The bartender suggested it to me after I’d tested Kapittel watou dubbel, and she was right to say this is a better beer.

Meaning “Winter King” in Flemish, this seasonal beer is designed to warm you up during the colder months. A robin on the label calls out to a snow-covered village. Perhaps it’s a cry of surprise that the branch he finds himself perched on is a hop plant in bloom. Definitely not seasonal, that.

It poured very dark and inviting on what was indeed a cold winter night. The taste was charcoal and thick malt at first. Fiona said it smelled like bubble gum, or spangles, a 1970s British candy. I couldn’t sense bubble gum at all. I think she had had her taste buds affected by the Cantillon she was drinking. Gueuze is so sour that anything you taste after that would seem overly sweet.

Still, even without a sour starter, Bink Winterkoninkske is fairly sweet and rich. The 8.3 per cent alcohol is noticeable, but it fits in with the overall complexity of this beer. It’s produced by the Kerkom Brewery, whose motto is:


we brew it here,
we drink it here,
and we sell what’s left.

An admirable business philosophy.
---------------------------
UPDATE, about an hour later: I've been informed by an anonymous comment that the bird on the label is probably a wren, because its common name in Dutch is winterkoninkje
.