The quest to Westvleteren abbey

I was talking to someone about Westvleteren today, and it occurred to me that I never really described the entire abbey experience. Yes, I dashed down a few remarks in my tasting notes on Westvleteren 12 and Westvleteren 8, but I never fulfilled my promise to return to the subject of the visit itself.

The part of West Flanders where the Abbey of Saint Sixtus of Westvleteren is located is a bit beyond the back of beyond. In some ways I was glad JC had bought a GPS for the occasion.

“It’s all pigs out here”, JC said as we sped along the B roads. “Pigs everywhere. But you won’t see any of them...”

With the sound of a lone banjo providing my mental background music, he explained how in West Flanders there were more pigs than people, but they were all kept in long factory-farm buildings. They would grow up quickly and be slaughtered en masse without ever really seeing the sun.

We drove past Ypres.

Farm after farm, we followed the bouncing pixels on our chirping navigator.

“It must know where it’s going.”

“But are we going to make it on time?”

Time. You think monks would be fairly relaxed about it. After all, it’s not like they have to worry about catching trains or filing reports within deadlines. And if they’re late for prayers or whatever, they can always ask for forgiveness and probably get away with it.

But the monks of the Westvleteren abbey seem obsessed by time. In fact, they are much more strict about keeping appointments than you might expect from a bunch of guys in dresses. And the process of getting their beer is a complex quest because of it.

First of all, long before you even think about getting in a car, you call the “beer phone”. Yes, the monks have a beer phone.

Then, if you get through to them after hours or even days of busy signals, they tell you which of the abbey’s three beers they will let you buy, how much you will be allowed to buy, and when you should call back to make an appointment to pick it up.

You phone back at the allotted hour, and in exchange for your car’s registration number, they give you a pick-up time.

Finally, you drive out into invisible-pig-land and try to reach this isolated village at the precise moment they told you to be there.

Apart from the addition of physical torture, it would be impossible to make this model of customer service any worse. The seller controls the type of product, the amount of product, and the time of purchase. You can take it or leave it.

Perhaps surprisingly -- at least for those who have never tasted the beer -- many people take it, although nearly all of the people waiting in the queue of cars as we arrived were retired folks who have the time to go through all this rigmarole. 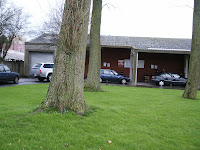 JC positioned his car in line behind about ten others. And we waited. And waited some more, pulling forward a few metres every time another car had exchanged its three cases of empty bottles for full ones. Clearly, they had all done this before. Without any returns in our boot, we exposed ourselves as Westvleteren virgins. 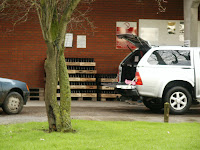 Then it was our turn to pull up to the loading area of the single-story brick building. A man -- not in a dress -- checked our car’s license plate against the list on his clipboard and then pushed over a handcart laden with three wooden cases holding 24 bottles each of Westvleteren 8. The only product on offer, and the only amount we could buy. I got out to pay, which I could do with a Maestro card. At last, one nod to customer service.

And then it was all over. The calling, the appointments, the arranging a day off work... We had done it. We were about 120 euro down, but we had 72 bottles of Westvleteren 8 to divvy up between us. Unavailable in any shop. Prohibited from further sale. Gold dust. 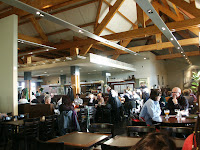 We were so chuffed with our haul that we went to celebrate across the road at the modern café the abbey runs. There in the crowded company of a hundred or so other treasure seekers, we sat and enjoyed a bottle of Westvleteren 12 with a couple slabs of bread and a whopping great hunk abbey-made cheese.

Sadly, we couldn’t get the 12 to go, though they did allow us to purchase a six-pack of Westvleteren blond, their third variety. We felt honoured the abbey had bestowed its gifts upon up. Blessed even.
--------------
UPDATE 0100 CET: Just found out that Daniel Radcliffe, the Harry Potter star, is also on a quest to Westvleteren. Apparently he wants it to be the first alcoholic beverage he drinks legally...