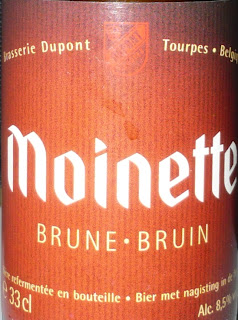 This was a good find for the 40b40. I’d never heard of Moinette before, but one sip convinced me this beer was worth knowing about.

Like a lot of dark beers, Moinette Brune has an inviting caramel flavour. It’s a bit sweetish though not too much. This beer goes well beyond that, however, with tastes of chocolate and cinnamon -- almost that gingerbready richness you get from a Rochefort, St Bernardus or Westvleteren.

It is thinner than those beers, though, and it has more fizz. Still, I wish I’d brought more than one with me to London.