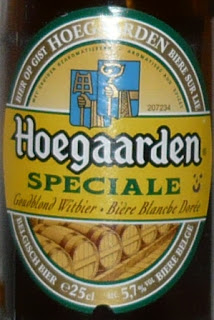 This was the third and final beer of the three beers I brought to London to carry on the 40b40 across the Channel. I’m a big fan of Hoegaarden, and I like Hoegaarden Grand Cru and De Verboden Vrucht, which are all products of the Hoegaarden brewery. Regular Hoegaarden is a great summer cooler, while the other two are warming and suit a cool autumn day. Hoegaarden Speciale was new to me, but sadly it didn’t live up to expectations.

The problem with Hoegaarden Speciale is I don’t see anything particularly Speciale about it. It pretty much tastes like Hoegaarden regular. Sure, it’s got a bit more alcohol in it, 5.7% vs 4.9%, and it is slightly maltier than the regular, making it a bit sweeter. (And I wrote that tasting note before I read Michael Jackson’s notes on the beer, which say the same thing.) But really, not worth a designation of “Speciale” -- apart from the fact that my eldest daughter bought this bottle for me for my birthday, hence the smiley face drawn on the label.

Hoegaarden Grand Cru and De Verboden Vrucht, however, are different beers altogether and are worth a glass if you get a chance.