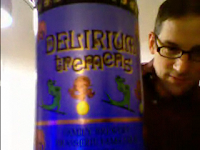 It’s beer number 38 of the 40b40, and I’m confronting a mixture of the marathoner’s total exhaustion and the lab rat’s goal-gradient verve. I can taste the end. But first, I have to taste this beer.

Today’s offering is Delirium tremens, a strong blond ale with a goofy label filled with pink elephants and proud alligators. It comes in one of those concrete-coloured bottles, like Gulden Draak. What’s that all about, anyway? Can't see the point. 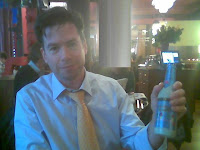 The first tasting of this beer occurred at lunch with my colleague Nick. We went to a lovely restaurant near Place Boniface with good food and an excellent selection of Belgian beers. He chose the beef curry, and I went for red pesto linguine and prawns. And, according to plan and right on schedule, we both ordered Delirium tremens. 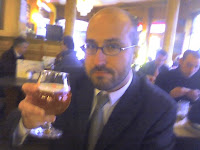 “Please, I asked you not to call me that in public”, I said.

But this beer does have a sweet aroma. Nick thought it possessed, “an initial feel on the tongue that’s fruity, with a yeast aftertaste that belies the beer’s non-serious name”. Spot on again. The aftertaste is very yeasty indeed.

It was a highly enjoyable lunch. Delicious food. We actually didn’t get nearly as deliriously tremulous as these blurry mobile phone images would suggest, nor does this beer have as much alcohol as you might think given the name. Only 8.5% actually. That’s not super high by Belgian standards.

In the evening, I had a second bottle, starting via Skype video with the Hague investigators, and continuing live with Seb, 40b40’s Trappist and Regional Brewery Analyst. 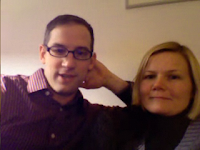 Seb was at first fairly positive about this one. “A good, lager-ish taste, with a yeast aftertaste. It’s simple and balanced.” He disagreed with the womenfolk about the alcohol overpowering it:

“Tastes 3% to me.” But Seb's a real man. He rides a motorbike, and no one would ever dare call him “Candy Nose”.

Later however, Seb had a change of heart. “Maybe it just tasted good when I had first come in from the cold”, he says, “or maybe it’s changed after sitting here for a bit.” But for him the flavour had deteriorated, and the alcohol taste became more noticeable. “You have to drink it down in one, or don’t drink it at all”, was his final word.

My conclusion: probably the latter of those two options for me, thanks. It’s another strong blond ale without much to distinguish it from the others apart from the pink elephants on the label.