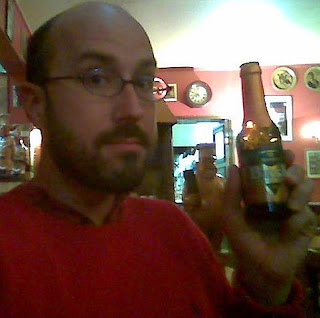 Yesterday, in comparing the Westvleteren 8 to the previous day’s Westvleteren 12, I wondered how I could talk about an excellent beer after experiencing a life-changing one. Today for the 40b40, I have no such dilemma, because the beer was Bush Amber, which plays about two leagues below any Trappist offering.

Or maybe three. Honestly, the Bush Amber did not impress me. And it’s not just because it carries the name of the current US president, whom I feel is the worst in the country’s history. No, even in a blind tasting, I would not have liked this one. Alcohol fumes overpower all other flavours in this 12% brew.

Michael Jackson found this beer, “chewy and nutty” and “beautifully well balanced”. Either he was drinking a different beer, or my taste buds were knocked unconscious at the first sip.

The Dubuisson brewery markets it proudly as “Belgium’s strongest beer”. And that presumably convinces some people to buy it. Not “refreshing”, “complex” or “full of character”. The pitch is just “big booze”. Silly really.

I did enjoy the surroundings where I drank this beer, however. Le Châtelain, on the square of the same name, is probably the best pub in my neighbourhood. To be fair, I don’t ask for much: it’s non-smoking and has a good beer list, and that’s enough for me.

Dubuisson have another beer called “Prestige”, which is oak aged, and I’d like to try that one. Off to Beer Mania then...