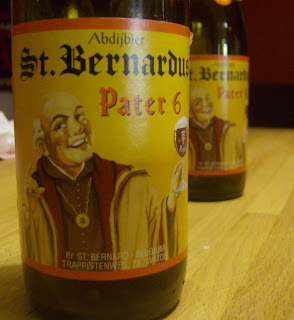 Day 12 of the 40b40 challenge found us again seated before the Hague investigation team, this time with St Bernardus, a brewery whose website promises, “Heavenly nectar within reach”.

We had three heavenly nectars to get through tonight -- St Bernardus Pater 6, Prior 8 and Abt 12 -- and we started with the 6. Unfortunately, I didn’t buy any of the “Grottenbier” from St Bernardus, which Michael Jackson apparently rated as one of his top ten. 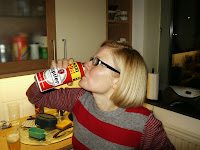 But things took a nasty turn even before the tasting began. First, the ladies cracked open a can of Jupiler lager -- “maxi 50cl” -- which was neither ladylike nor in the spirit of the 40b40. Then, things went from bad to worse, when a fight broke out over the label of St Bernardus. 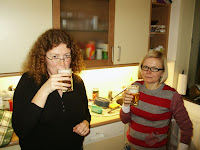 I think the label used on all these ales is a bit childish or amateurish, but when I suggested this, Chief Hague Investigator Bob shot me down. “I think it’s a fine label.” Nona said it’s “cute”, but my point is, who really wants to drink a cute ale? Seems an odd marketing device to me. “You gonna talk or drink?” On to the opening of the bottles, then... 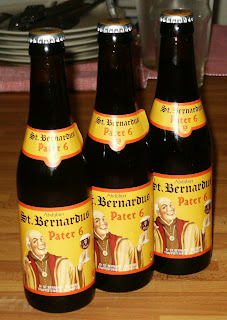 The St Bernardus Pater 6 is a cloudy dark amber with a taste that pleases all around. “This is a girlie beer”, said Nona, “and not alcoholic at all.” It has a lasting head, noted Seb, “and that’s important to me in a beer.” “I have the same feeling”, Nona chimed in.

My immediate reaction was smoothness with a light gingerbread flavour. Michael Jackson wrote down banana and melon, but none of us tasted any of that really. Maybe the slightest hint of old brown banana, I thought, but perhaps it’s just suggestion playing a trick. Fiona said it has a peachy smell. Bob said it is “really deep and thick... like a milkshake or a properly poured Guinness”.

A brief lull in the conversation sparked a return of the label debate. Seb said the monk on the label is fake marketing. This is a secular brewery playing up the religious connection far too much. Just look at that “heavenly nectar” talk on the website. Nona thought it’s deliberately sticking with an old label that has kitsch-but-cool staying power. Bob was offended because he chose St Bernardus to be tonight’s beer.

Still, label aside, we all agree the St Bernardus Pater 6 is a great drink. And it is what’s in the bottle that really counts. 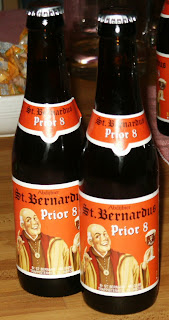 After dinner we moved on to the St Bernardus Prior 8. It’s slightly lighter in colour with less head than the 6. Some of the same flavours were evident. Bob immediately noted cinnamon. I sensed an even stronger gingerbread. Fiona tasted something ferrous about it, like the mineral water in Karlovy Vary in the Czech Republic -- that slight whiff of blood.

Nona noted almonds, which brought nods all around. Jackson suggested coconut, but again no one could find that. Maybe chocolate (Nona).

Neither the St Bernardus Pater 6 nor the St Bernardus Prior 8 is a terribly complex beer, but both are very enjoyable. It’s not overly challenging like the malt loaf of a Rochefort 10, but rather subtle like gentle gingerbread cake (the Czech pernik, for example). 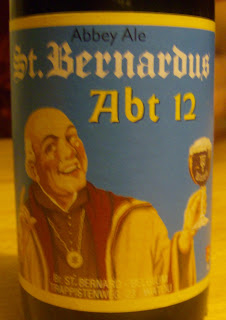 The last ale of the evening was the St Bernardus Abt 12, the darkest of the lot, with low fizz like the 8. No need for complex tasting notes here. All you need to know is banana. The smell of banana hits you when the beer is still a arm’s length from your nose. Then, the taste is even more so, maybe even caramelised banana. Forget Jackson’s “coconut” -- this is just banana from start to finish. “Too banana-y”, we all agreed, though Fiona thought the fruitiness might make this a “good afternoon beer”. 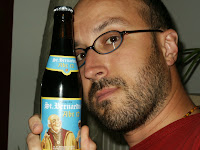 We all preferred the 6 and the 8 tonight. Of those two, it was a toss-up: I would probably choose the 8, but not really by that much. The 6 is a fine brew, too. Just keep that banana-y 12 away unless you’re having a fruit salad -- in the afternoon, of course -- and, well, don’t be turned off by the goofy monk on the label of this secular beer.