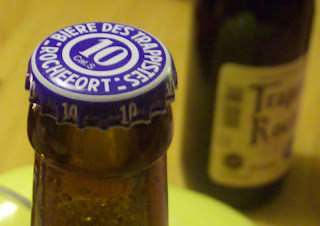 Hague investigators arrived at about dinner time, as expected, but by the end of the evening, in their own words, “we didn’t investigate much, did we?” Indeed not. But we did enjoy three lovely beers together from the Abbaye St-Remy, Rochefort.

It was a successful night of beer sampling. I now have so many pages of Rochefort tasting notes in front of me, it is difficult to know where to begin...

Let us start at the beginning, where we started: with Rochefort 6. This poured out of the bottle with a super dark amber and steady but low-fizz head. Initial reactions from everyone were very positive. “Raspberry” said Seb at once, followed by “chocolate” by someone else. I agreed, immediately thinking of my favourite chocolate, the fruity red coeur from Wittamer, the famous Belgian chocolate maker. Heavily marketed in the run up to Valentine’s Day, these red love-hearts are chocolates with fresh essence of red fruits, particularly raspberry. Seb’s first impression was spot on. Fiona gave me a box of Wittamer love-hearts for my birthday, so I passed them around, and everyone agreed: Rochefort 6 and raspberry-chocolate. 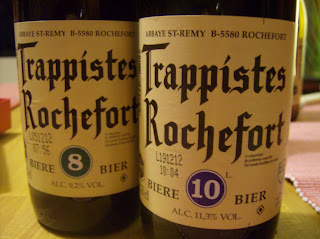 The aftertaste of the 6 is well balanced, with grapefruit pith overtones masking the alcohol (7.5%). Nona spotted a bit of oakiness, but no one could spot Michael Jackson’s find of “Darjeeling tea”.

We thus moved on to the Rochefort 8, at 9.2%, the middle of the three Rocheforts. Something strange happened with this one. The pour was very dark, and the immediate scent was, Fiona noted, “autumn apple gone a bit off”. She meant it in a positive way, as in “apple must”. It certainly was low-fizz like the 6, but apart from that, this 8 was clearly its own beer: nothing raspberry or chocolaty about this one.

“The alcohol taste is too strong”, said Fiona and Nona, referring to the too noticeable 9.2%. It did seem unbalanced in this way to me, too, especially in the aftertaste. “This is not a girlie beer”, said Nona.

“What is a girlie beer”, said Seb.

“What do you do after a beer like this?” asked Seb. “Take a nap”, came the reply.

Michael Jackson suggested a hint of figs in the Rochefort 8, but none of us could detect that. “He just needed that to fill the page”, Nona said.

Seb said he would not try 8 again. “I prefer the 6.” Nona and Fiona agreed. I’d had the 8 before and liked it, but coming immediately after the 6, I had to admit the 8 was a different beer.

But then Bob had a brainwave: “it has a lingering aftertaste of something”. Further prodding refined his statement: the something was Becherovka, an herbal liquor from the Czech Republic, where Bob, Fiona and I all met some 15 years ago.

I had to agree. Although the formula for Becherovka is a great secret, it’s clearly a blend of warming spices, like nutmeg, star anise and cinnamon -- maybe a bit of clove, too. Some of that is in here certainly. but it ends up making it too medicinal. 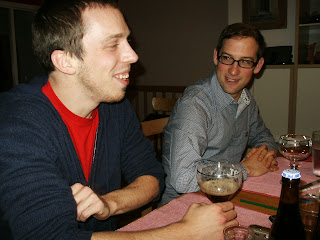 “You could rub this on your chest”, said Bob, “the medicinal aspect is so strong."

That was enough to move us to the final beer of the night, Rochefort 10. This is a dark, dark, dark brew, again with a low level of bubbles. The scent of it immediately made us realise this was nothing like the 6 or the 8. And though 11.3%, the alcohol is still amazingly well-balanced in the cacophony of flavours.

“Gingerbread and Christmas pudding”, said Fiona sniffing it, to which I added, “malt loaf”, to her nodding agreement. Fiona and Nona had initially been unwilling to move on to the 10, but one whiff of it, and they popped open another bottle.

“It has brought back the Rochefort 8 haters”, cried Seb. Very true, but then, this is a very different beer.

“Packed with dried fruit”, “cinnamon”, “pine”, “treacly texture”, “charcoal”, and “brandy” were other words to describe this “so complex” brew. Everyone agreed it was more worthwhile than the 8.

“And we have a winner”, Judge Bob announced. “Rochefort 10.” Though still: try the 6 -- it’s very worthy, too. And, although the 8 was number three of three on most tasters' list, it's still tasty enough. I wouldn't kick it out of bed for eating crackers.