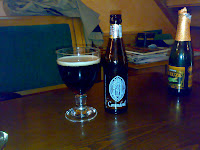 40b40's Trappist and Regional Brewery Analyst Seb writes: Moving up north to Corsendonk, the beer added to our Competing Athlete's list following massive unrest outside 40b40 headquartes in Ixelles.

Let's start with a tap alert: the beer is served on tap in the fake Irish pub behind the main square in Bruges. Although the manager is obviously uninterested in its treasure, you can actualy sip Corsendonk agnus on tap there. It seems Corsendonk on tap is not a rare thing in its region of origin either: Antwerp province.

The beer is named after the priory of Corsendonk in Oud-Turnhout, Antwerp province. Before you start planning a tour of Belgian brewery sites, just take this name out of your list since firstly it is no longer in operation on site, and secondly it is now a conference center closed to the general public. If you read this note just as you enter Oud-Turnhout, instead of reaching for the priory in the south of the city, aim north for the Lierman, one of the largest nature preservation parks in Flanders.

Dating back to 1398, the priory operated as a brewery until 1784, when it was closed altogether by order of Joseph II, the Austrian emperor. Brewing operations restarted in the twentieth century under the auspices of the Keersmaeckers brewery in Oud-Turnhout, since when Corsendonk beers have been heavily marketed as a product of the Middle Ages, as seen on its logo and seemingly hand painted bottles.

Since 1982, Corsendonk beers have been brewed at Du Bocq brewery in Purnode in the Belgian Ardennes. Interestingly, the beer that was supposed to be the first beer of Flanders in our Athlete's list is in fact brewed in Wallonia.

But the most interesting point is probably the brewing process of these beers: twice fermented, once at a temperature of 15C, the second being in the bottle at 22C. Corsendonk beers are said to be best consumed not necessarily fresh out of the shop, but six months after bottling.