Following quickly on Chimay Day, the 40b40 effort moved on to Leffe Day. Too quickly, some might say, because in order to make the timings line up for the simultaneous drink with Blair Murray in New Zealand, your poor competing athlete here in Brussels had to sip his suds at 10 in the morning.

The technology didn’t fail Blair and me quite as much as the snaps here would suggest: we had a nice chat on the video line thanks to Skype, but as you can see, from my side anyway, it was a grainy picture like something from the first moon landing. Is New Zealand really that far from Belgium?

With it being so early, I really only had one small sip of the Leffe 9 I opened. Blair and I parted, and he finished his beer in comfort as his day drew to a close. I put my bottle in the fridge and got on with my morning. This didn’t really help the beer any -- it really wasn’t worth drinking when I came back later. Not recommended.

Now, as I write this in the evening, Fiona and I are enjoying a fresh bottle properly. Or, I should say, I am enjoying it. Fiona says it tastes like kak and has put hers down. More for me then.

Trappist and Regional Brewery Analyst Seb recommended the 9 from Leffe, which is a strong blonde. His notes de terroir for Leffe will soon follow on this blog. Indeed, Leffe 9 is richer than the other offerings from Leffe. Too rich for some. (Fiona does like the regular Leffe Blonde, by the way.) I taste butterscotch in this one, of all things, and the 9% alcohol is obvious, though not disturbing the overall balance of flavours. 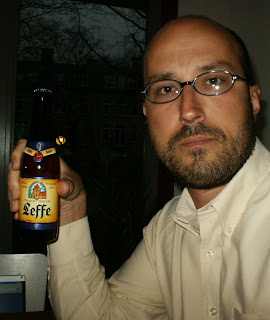