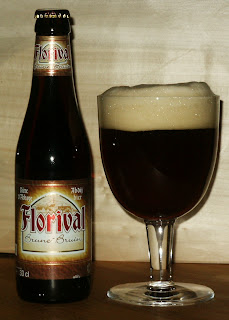 Well, this is one evening that hasn’t turned out as planned. Fiona’s not been feeling too well, so our small get-together this evening has been cancelled. Still, the 40b40 must go on.

Tonight is Florival night, and though I’ve got quite a number of bottles here in expectation of a party, I’ll just have one: Florival Brune. The label claims it’s an abbey beer, but it doesn’t have the official Belgian abbey beer logo on it. Bit of a mystery, then...

The head of the Brune is nice and puffy. The taste is not too distinctive, though. Light caramel, but then a bit sour -- rather than bitter, which would be fine. 7% alcohol pretty much stays in the background. It has a stale aftertaste, with an overall mouth-feel like soggy cardboard and cold chewy bacon. Not a real winner here.

Further inspection of the label reveals it is brewed for the Delhaize supermarket chain. Shocking! Who put this on my 40b40 list? Where’s my Trappist and Regional Brewery Analyst? Skiving off early to his new job in Côte d’Ivoire, I suspect. I demand a thorough review of the beer list! Supermarket beer! Of all things! Thanks goodness I didn’t serve it to guests.

And “abbey beer” on the label? How do they get away with that? Are you trying to tell me there is some kind of Abbey Delhaize somewhere with monks manning the checkouts?