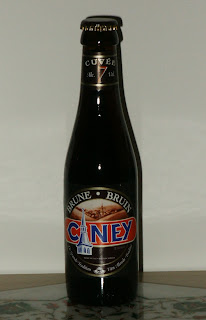 So glad it’s not another strong blonde ale... Tonight, your overworked Competing Athlete will submit his 40b40 entry a bit later than planned. Been busy.

I’ve been preparing to speak on a panel discussing Central Asia tomorrow, and apparently I have to talk about something other than Belgian beer. Shame, really. I have some good import statistics for ales in Karakalpakstan. They really knock back the Piraat at the Aral Sea resorts there. It helps you forget you’re 100 kilometres inland.

And now Torchwood’s started on BBC 2, so I’m going to delay writing the tasting notes further...

“I like the bottle cap”, says Fiona. Indeed, the stylised “C” with a bit of a dorsal fin is pretty nifty. But I think it’s the same logo as some American baseball team. Cincinnati? I wonder who used it first.

The other thing I have to mention concerns the name. When we first saw it on a sign a few years ago, we looked at the church steeple used in the name of this non-abbey beer and wondered what letter it was supposed to stand for. Was it an “A”, so “CANEY”. Or was it an “I”, so “CINEY”. Fiona and I had debate about it -- and like all such discussions between us, I no longer have any idea who took which side, but I am sure we didn’t actually figure it out for quite a while. Mostly because we really didn’t care that much about it, I suppose.

OK, tasting notes. Ciney brune has a fairly light taste for a dark beer. Bit of caramel, date surely... maybe a touch of cinnamon? Not overly demanding at all, so maybe a bit “empty”, like the Grimbergen dubbel perhaps -- and the two brands are both made by the same company, Alken-Maes. If I had to choose, though, I’d take the Ciney.

The second Ciney tasted better because Fiona brought it to me. Even opened it. She’s lovely. I’m sure she must have been right in the A-vs-I debate all those years ago.