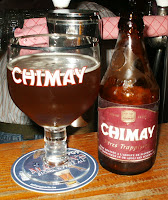 The great 40b40 quest began today with The Feast of Chimay. A small crowd gathered at Supra Bailly at seven, and most of us started with Chimay Red.

We would have begun with Chimay White, but the only White they had was the display bottle, and they wouldn’t let us buy it no matter how we asked, even though it was in date.

So, we tried the Red, and it was cold, freezing in fact --

a couple of the bottles of the Red had even gelled up from the cold, apparently, and our Chief Brewmaster had to warm his beer up in his hands before tasting it. A worrying start.

But then came the Chimay Blue, which as a stronger brew should naturally come second of the two. It was still cold, but bearable. 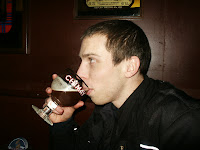 The tasting notes brought out a variety of comments. I was thinking light caramel with dried apricots, though the taste left quickly. Just about everyone else found the Red wanting in one way or another, too.

“No palate”, our Trappist and Regional Brewery Analyst remarked. Other people said, “weak”, “tastes British”, “quite empty”, and “a bit pissy”. Perhaps it was just the temperature.

The Blue went down much better with everyone, much deeper and richer. I found thicker caramel, treacly, with more dried fruit, perhaps something sharper, like dried cherries here. “Smooth and zesty” said others, though one comment was “rusty road kill aftertaste”. Ouch.

Chimay Blue is a pretty familiar beer around here, and I’ve had it before, so I was glad to try the Red for the first time. Have to say I was a bit disappointed with it. But still, a good start to the 40b40. 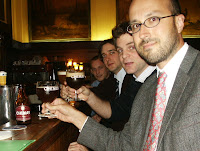