Bosteels and the wonder of Deus 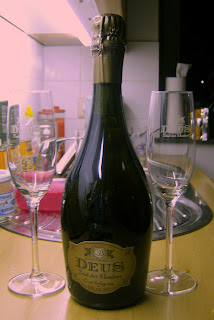 My kidnapping to the undisclosed location was all a dream, I think, or maybe today is Groundhog Day, as people keep singing “Happy Birthday” to me where ever I go, repeating the experience of last night over and over. But no, I can tell my life is not stuck in a déjà vu loop, because the beer I’m drinking today is different than yesterday. Today’s beers from Bosteels (Deus, Kwak, Tripel karmeliet, and a surprise beer) have saved me.

We started off with the heavenly Deus, Brut des Flandres. When I first read Michael Jackson’s extreme praise of this beer, I was sceptical. And then, when I first dropped 18 euros on a bottle of it, I found it hard to believe it could ever live up to the huge expectations my research and my wallet had placed on it. But it did. 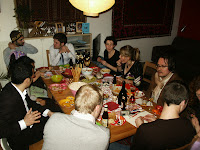 Deus is a unique experience. After opening the champagne-like bottle and pouring it around, I lifted the glass of pale, fine-bubbled liquid and was quickly drawn into the huge bouquet of flowers engulfing me. Lavender, rose, violet, jasmine, honeysuckle and more all strong on the nose and tongue. It’s light and crispy, bursting its petals across the palate. “This is not beer”, said one critical traditionalist, but the faintest hint of malt is recognisable, even if it does come from across a field of blossoms.

Others picked up a bit of spearmint and perhaps a whiff of ripe peach. At 11.5%, the alcohol is very noticeable, but it doesn’t overpower anything; rather it lifts the numerous fragrances up to your nose and works them around your mouth. This is a fantastic surprise find, and it has made my 40th birthday a very memorable experience. I will certainly be buying Deus again for other special occasions. Go to a shop and throw 18 euro down for it. It is worth it.

Tasters then went for the other beers from Bosteels, which had an almost impossible act to follow. Some moved on to Kwak -- the one with the wooden stand and round-bottomed glass. They found honey and caramel on tasting and called it “very smooth”. “A bit like glue (but not in a bad way)”, was another comment.

Having tried Kwak before, however, I went next to Tripel karmeliet. It poured cloudy amber with an explosive amount of bubbling in the glass. I noted citrus, and Seb found nougat. Some said it had some similarities with a wheat beer, which is quite logical as wheat is one of the three grains that make up this beer. Fiona said she liked Tripel karmeliet, but I just didn’t find anything distinctive enough in it to really separate it from the pack of other ales. Slightly disappointing, I thought, though maybe after the Deus, this poor beer didn’t stand a chance with me. 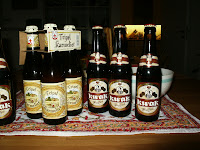 Finally, Stefan brought a real surprise: a beer from Bosteels we’d never heard of before called ‘t Zelfde or La Même Chose (The Same Again). This one was more interesting, more complex, than the Tripel karmeliet, I thought. Honey notes, some said, though I sensed a hint of liquorice and something pleasantly vegetal, like freshly shredded carrot. I would have to try another bottle to be sure.

Birthday now over, I will dream of Deus tonight...