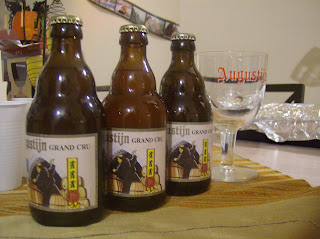 My video conference tasting of Augustijn abruptly ended when three beautiful females stormed into the room and dragged me out of my home. I protested that I had not even opened my Augustijn Grand Cru yet, but I was silenced by a piercing scream from the shortest of the three. I was then blindfolded, taken outside and marched through a number of circuitous streets, making several turns, backtracking and spinning around so I would not know where we were headed.

My mind raced to figure out why I had been taken prisoner like this. Could it have something to do with the Van Steenberge question? Only my captors knew, and they weren't talking.

We ended up in a seemingly ordinary flat, but one filled with a collection of notorious characters from the world’s most perfidious international conspiracy. I felt I was nearing my end: though aged 39 years, 364 days and 18 hours, I would probably not reach 40. 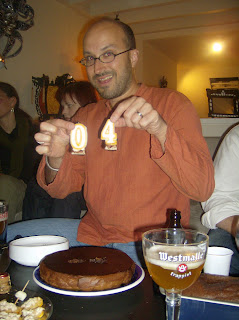 I was offered gifts of beer and beer glasses of all shapes and sizes, but I knew this was a trick. I was in a den of spies. All they really wanted me to do was talk and tell them all I knew about 40b40. I was trapped, and there was no way out.

More Augustijn bottles were presented and poured into a glass for me. I tried to resist, but after the beerboarding -- worse than waterboarding, I can assure you -- I gave in. The bottle caps fell like rain on spring day in Brussels. I was in trouble, and I knew it.

Then they brought out the Augustijn Grand Cru, and any remaining shred of hope was lost. I would tell them what they wanted to know, and share not one but two chocolate cakes besides. “No, I’m not 007”, I cried in one last attempt to regain the upper hand, “I’m only 04”. But they saw through that.

The spies’ Augustijn Grand Cru was an impossible beer to resist. My interrogators noted, “it stays in the mouth longer”, and was “deeper, richer, yet still with some citrus tones”. “It makes you realise how quickly the regular Augustijn leaves the palate”, one said with a haunting laugh that will stay with me forever. Looking back, I realise it may have been Stockholm Syndrome kicking in, but I had to agree that, although the regular Augustijn is good, if given the choice, I’d go for the Grand Cru.