“It’s a hard ‘g’”, I’ve been told, but Affligem seems brilliant enough to deserve the bejewelled title, “gem”. Indeed, it won the Gold Medal at the Association of Brewers’ World Cup in 2004.

This is another one I’ve never tried before, and I should say I was actually impressed with this abbey beer from the moment I saw it on the shelf at the shop. The label is impressively well-designed. Just had a quick tour of the website which is also nicely done. It’s a Flemish beer, too, so for those who are counting, it’s now three/two Wallonia/Flanders.

I bought the tripel for this 40b40 tasting. It pours out with a slightly cloudy amber colour. Fiona names it “honeycomb”, which is perfect. The taste is fairly sharp, and the alcohol of 8.5% stays a long time on the tongue. It has hints of some fresh fruit: Michael Jackson says strawberry, and that makes sense to me, though I might even say something more tropical, like papaya. Whatever it is, it’s a worthy beer to be sure.

This is another good discovery for me. Finding new beers to enjoy is part of the whole purpose of 40b40. Never too old to try something new, you might say. 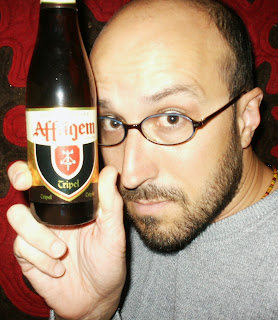