After the busy big-name brewery days of Chimay and Leffe, we now settle down quietly at home with a beer I’ve never tried before: Floreffe. In fact, I’d never even heard of this abbey beer before, so this is truly a new avenue. I’ve got the double (dubbel) here, which has a picture of the lovely abbey on the label. (though it's brewed by Lefebvre)

It pours very dark with a thick head. The taste is slightly burnt or toasty at first. It is both bitter and sweet, with something like dark chocolate about it. Fiona says there is almost a cola taste to it, and we both agree it is a thoroughly pleasant drink. At 6.3%, it’s not too alcoholic either.

Yes, this one I will buy again when 40b40 is all over. I’ll have to try the abbey’s other offerings, too. According to the abbey website, they have:

But if this pitch black brew I’m drinking now is the “amber”, I can’t imagine the colour of the “brown”.

OK, that’s all for day three, I think. Maybe I’m just getting old, but after the hectic pace of the last couple days, I think I just need to relax now with this one.
-----
UPDATE TRIVIA: 40b40’s very own Trappist and Regional Brewery Analyst, Seb, says his sister did her wedding photographs at the abbey Floreffe. 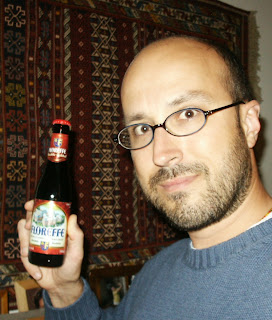